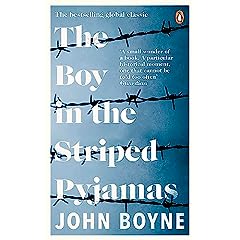 I’ve just read ‘The Boy in the Striped Pyjamas’ by John Boyne, highly recommended by my wife .  It is the story of Bruno, a 9 year old German boy, whose father is sent from Berlin by a small man with a small mustache called ‘The Fury’ to be commandant of a place Bruno thinks is called Out-With.  Bruno makes friends with a boy who wears striped pyjamas and who lives on the other side of the fence with the other boys and men (there are no women on that side of the fence).

It is a beautiful and tragic story of the Holocaust, made even more poignant because it is told through the innocent eyes of a boy who does not know or understand the horrors of the place he now lives.

The book ends with the words

‘And that’s the end of the story about Bruno and his family.  Of course all this happened a long time ago and nothing like that could ever happen again.  Not in this day and age.’

If only we all viewed the world in the way that Bruno did.