I got some really cool stuff for Christmas.  FIFA 07 for our PS2 has been by far the most used but I wanted to share a couple of others.

The first is a book called ‘Speeches That Changed The World’. 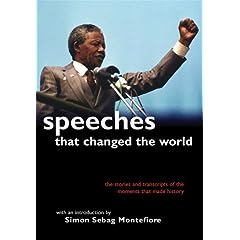 As you can see Mandela gets a mention but so does Hitler.  It’s a fascinating book full of speeches that have indeed changed the world, for good or bad.  Stalin, Lincon and Kennedy.  The way words are used to fool and inspire.  A great book.

I like to write.  I guess my dream job would be Sam Seaborn’s job in The West Wing!  Which brings me neatly to the second gift…

Series 7 of The West Wing!  I’ve been a ‘wingnut’ since the beginning.  What an amazing TV show.  I’ll admit that it dips a little through series 4 and 5 but it is still by far the best show ever made.  Now it’s over… but I have all 7 seasons on DVD!!!  When I’m stuck, uninspired, a little down or bored I stick on an episode and never fail to get inspiration.

My favourite speech episodes from the whole show are Galileo and 20 Hours in America (part 2).   Galileo is about a space probe and exploration.  Sam gets it but CJ doesn’t in the beginning.  She’s not ‘saying it right’.  20 Hours in America has the best 6 lines of TV ever.  ‘There are too many angels…’  Stunning writing.  Check it out if you haven’t already.